Media Coverage of April Days of Action Against Drones

The April Days were off and running when the Guardian reported on March 27:

Military bases, universities and companies involved in Barack Obama's drones programme are to be targeted in a month-long series of protests by activists keen to build on the renewed public focus over the president's controversial policy. 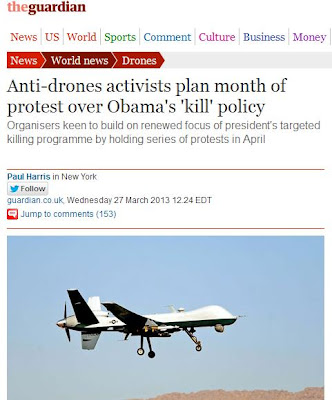 Dubbed "April Days of Action" by participants, organisers are hoping to capitalise on a series of recent controversies that have thrust the use of drones – especially when it comes to targeted killings of suspected terrorists – into the heart of American political debate.

Since then, press reports have increased daily. Other highlights have included:

Russia Today video on Youtube: Eye in the Sky: Protests against drone use hit New York

Truthout: "April Days" to Protest Drone Killing and Surveillance, Long Planned, Gets Boost From Opposition to Drone Use Inside the US

In These Times: 10 Signs of a Growing Uprising Against Killer Drones


Read about ALL the ways YOU can be involved
in the April Days of Action Against Drones!

Email ThisBlogThis!Share to TwitterShare to FacebookShare to Pinterest
Labels: anti-drones protest, April Days of Action 2013, mainstream media response to the problem of drones