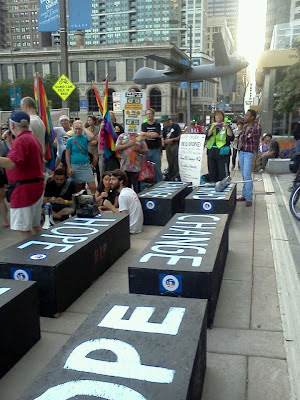 ILLINOIS - Occupy Obama drew attention to Barack Obama's drone victims with a funeral procession in Chicago during the Democratic National Convention (DNC), which ended up at Obama 2012 Campaign HQ. (Coffins were marked "hope" and "change.")

Anti-drone activity has continued around the country in recent weeks -- see descriptions below. (In addition, see the links at right for updates from other locations.)


NORTH CAROLINA - The Democratic National Convention (DNC) drew to a close, but the NOrth Carolina protests against the Democratic administration's drone killings continue.

CALIFORNIA - The City of Berkeley's Peace and Justice Commission finalized "no drone zone" language to send to the full City Council for a vote. Consideration will likely be scheduled for November.

OHIO - During its tour of Ohio, the Know Drones tour put pressure on Ohio Rep. Michael Turner to Stop the Drones! This effort gained the attention of anti-drones groups around the country and was a heavily viewed web page.

Please send links to news of other drones protests around the country to Joe Scarry -- jtscarry [at] yahoo.com . 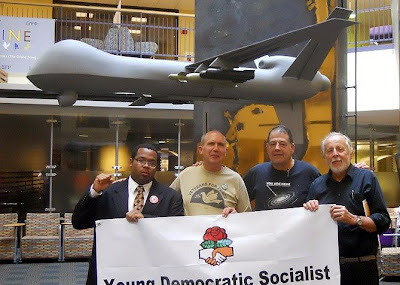 Posted by Joe Scarry at 8:56 AM No comments:

August & September Seeing Drones Protests Breaking Out All Over

Here's a round-up of selected actions from around the country in recent weeks, plus several key upcoming events. (In addition, see the links at right for updates from other locations.)

MISSOURI - Please support the efforts of people in Missouri to shine a light on U.S. extrajudicial executions and other government crimes at the first-ever trial in U.S. Federal Court for an action at a drones base. See September 10: Put the Drones on Trial! Join Ramsey Clark, Kathy Kelly, Ann Wright and Bill Quigley.

OHIO - During a series of events in the Dayton area ... Know Drones Tour to Highlight Choice: Green Energy or Non-Stop War for Resources? "If we are to begin a serious, effective mobilization to get off fossil fuels, we must close the door to the use of the military to 'capture' oil. The military option for access to oil must no longer be an option."

MARYLAND - Read about how activists in the Baltimore area are Calling for End to Drone Research at Johns Hopkins University. University research is a key front in resisting the drone proliferation.

ILLINOIS - Air shows have been important arena for educating the public about the menace of drones. See Taking the NO DRONES! Message to the Masses at Chicago's Air & Water Show for information on the action in Chicago in August.

FLORIDA - Another key arena is military contractors. Read Why We Need to STOP the Raytheon Drones Killing Machine to see how activists from CodePINK and others highlighted this issue in the St. Petersburg area.

WISCONSIN - Shoppers at the summer farmer's markets in Madison, WI, have been getting a taste of political education, as can be seen in this TASTE OF DRONES PHOTO ESSAY. 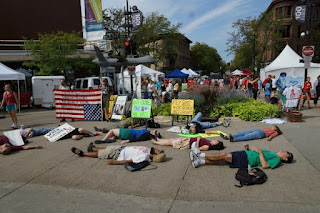 Posted by Joe Scarry at 5:56 AM No comments: