A coalition of peace and justice groups -- the Network to Stop Drone Surveillance and Warfare (NSDSW) -- has made a call for national protests against drones in April, 2013. The "April Days" include events in dozens of cities nationwide, as well as a range of ways for people to participate wherever they are. (Read more about the continuation of this campaign: Summer Days Against Drones .)

Dozens of actions have been planned nationwide, and new events are being added daily. Events are planned for Boston, New York City, Philadelphia, Baltimore, Washington, DC, Atlanta, Dayton, Ft. Wayne, Chicago, Milwaukee, Minneapolis, Des Moines, Seattle, Tucson, San Francisco, Sacramento, San Diego, Honolulu, as well as in dozens of other locations, including many of the communities that host the estimated 100 drone basing sites in the U.S.

See the full list of vigils, protests, lectures, and other actions that are part of the April Days nationwide.

As part of the April Days of Action Against Drones, anti-drones activists will be tweeting throughout the month, using the hashtags #AprilDays and #nodrones.

Read about how you can be part of the #ApilDays campaign on Twitter.

The April Days of Action Against Drones is just the beginning of an intensive campaign to educate people nationwide about the menace of drone surveillance and drone killing.

Through books, videos, studies, and a host of other resources, people will be learning -- and teaching -- about drones and how to bring an end to their use.

Read more about education tools YOU can start using TODAY!

The April Days of Action Against Drones are coinciding with a groundswell in local efforts to control or ban drones.

Major drivers in the move to ban drone use at the local level are (a) acquisition of drones by local sheriff and other law enforcement departments; and (b) the Department of Defense (DoD) plan to base drones in over 100 locations nationwide.

Read more about the movement to regulate drones on a local level.

A vital group of allies in the April Days of Action Against Drones in city after city have been faith-based groups. Indeed, faith-based groups are longstanding stalwarts in the antiwar movement, and a growing number of faith groups are entering the struggle for human rights, peace, and justice.

Group letters, blogs, vigils, and denominational resolutions have all been part of the faith response to drones so far.

Nonetheless, there is much, much more work for the faith community to do in addressing the problem of drones.

Read more about how the faith community is getting involved in the problem of drones.

WILL POLITICIANS WAKE UP?

A big problem is that U.S. congressmen have been convinced that (a) the American people support the President's campaign of drone killing, and (b) drones are good for the economy. Many of them participate in the drones caucus in Congress, a.k.a the "Unmanned Systems Caucus."

The "April Days" should start to make members of Congress question these assumptions.

Maybe 2013 will be the year that members of Congress will realize they can no longer hide from the drones issue, and from their larger responsibility to control U.S. militarism.

Read more about the work people are doing to get Congress to do their job and stop the drones!

There are actions happening all over the country during the April Days. But no matter where you are, you can be actively involved in the movement to resist drone surveillance and drone killing.

Through a diverse range of activities -- dramatic productions, the Drone Quilt Project, poetry, postcard projects, and more -- people are contributing to this massive, world-changing effort.

Read more about ways you can resist drones wherever you are.

APRIL DAYS IN THE MAINSTREAM MEDIA

The April Days were off and running when the Guardian reported on March 27:

Military bases, universities and companies involved in Barack Obama's drones programme are to be targeted in a month-long series of protests by activists keen to build on the renewed public focus over the president's controversial policy.

Dubbed "April Days of Action" by participants, organisers are hoping to capitalise on a series of recent controversies that have thrust the use of drones – especially when it comes to targeted killings of suspected terrorists – into the heart of American political debate.
Read all the press coverage of the April Days of Action Against Drones.

A vitally important part of the April Days is the development of a strong anti-drones, antiwar movement. That means organizing.

Reach out to activists in your area and make a commitment of time, energy, and imagination.

Need help getting connected? Use the No Drones Network volunteer form and we'll put you in touch with organizers in your state.


MORE ABOUT THE APRIL DAYS

The April Days of Action Against Drones arose out of a call by the Network to Stop Drone Surveillance and Warfare (NSDSW) for a month of action during April, 2013, including protests against drone manufacturing, drone research and/or training of drone pilots at colleges and universities, and drone bases.
Posted by Joe Scarry at 8:16 AM 15 comments:

The April Days of Action Against Drones have been imaginative, colorful, powerful, and inspiring!

We're encouraging people to look through the images below, and click through to learn more about the ones that you want to know more about. We hope you'll look at them all! And we'll be keeping an eye on which pages get the most views, so please share your favorites widely!

And when you're done: get in touch with your local "no drones" group and get involved!

Posted by Joe Scarry at 7:00 AM No comments:

In response to a call for national protests against drones in April, 2013, dozens of actions have been planned nationwide, and new events are being added daily.


To date, actions and events have been listed in these locations:


For additional information -- and to list your event -- go to the full, up-to-date list of anti-drone initiatives.


Read about ALL the ways YOU can be involved
in the April Days of Action Against Drones!

Join us to promote the major convergence happening April 26-28 in Syracuse, NY.

Here are some Twitter addresses for speakers and other participants:

As part of the April Days of Action Against Drones, anti-drones activists have been tweeting throughout the month, using the hashtags #aprildays and #nodrones. 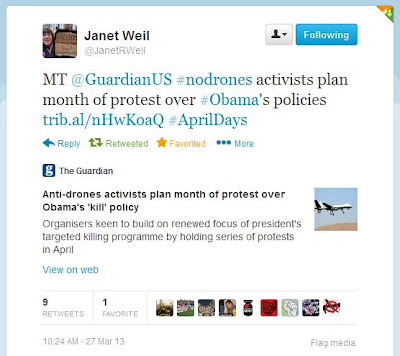 Please follow and retweet the accounts of these April Days coordinators:

And all the other state accounts:

Every TUESDAY there will be an intensive focus on promoting the April actions in cities across the country. 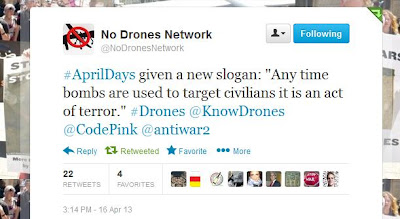 When there's important news, Twitter is a great way to get the word out:

Read about ALL the ways YOU can be involved
in the April Days of Action Against Drones!

Posted by Joe Scarry at 5:59 AM No comments: