Drones Activism: Big Stories in the No Drones Network

Below are links to some of the most viewed pages during the past 6 months on sites in the No Drones Network. Obviously, this is just a sampling of drones activism nationwide -- but a great place to start! (What are you prepared to do?) 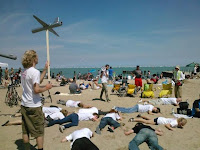 CHICAGO: Taking the NO DRONES! Message to the Masses at Chicago's Air & Water Show: "As we sit here in comfort, and ooh and ahh over these war machines, it's important that we remember, that when the rest of the world hears these sounds, it means that their lives may soon be ending." (Read more . . . . ) 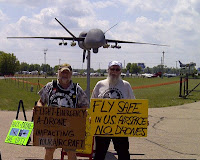 WISCONSIN: Welcome to Oshkosh! (got drones?): David Soumis and Lars Prip from No Drones Wisconsin greeted visitors to the largest airshow in the country -- EAA AirVenture in Oshkosh, Wisconsin* -- on Saturday, July 28, with the 1/5-size replica of a Reaper drone (which the recently obtained from Know Drones) and signs that said "Flight Emergency: A Drone Impacting Your Aircraft," "Fly Safe in U.S. Airspace: NO DRONES," and "No Drone Eyes in Our Skies." (Read more . . . . ) 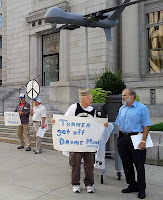 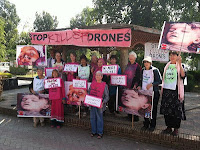 INDIANAPOLIS: My visits to Pakistan and Kurdistan: JoAnne Lingle of Indianapolis on the Code Pink peace delegation to Pakistan: "We want to reach out to the people there to show that we care about their lives; we want to show the American public how civilians are being targeted by drones; we want to come back to the US and tell the stories of drone victims. Our larger goal is to stop the drone strikes." (Read more . . . . ) 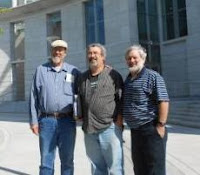 MISSOURI: September 10: Put the Drones on Trial! Join Ramsey Clark, Kathy Kelly, Ann Wright and Bill Quigley: The defendants, Ron Faust of Kansas City and Brian Terrell of Maloy, Iowa, participated in the April 15 “Trifecta Resista” protest at Missouri’s Whiteman Air Force Base, from where killer drones engage in combat in Afghanistan by remote control. The protest at Whiteman is one of many in response to the US government’s increasing use of drones in recent years, but the trial in Jefferson City is the first time that charges have been filed not in local courts but in US District Court. (Read more . . . . ) 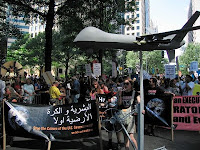 CHARLOTTE: DNC Ends, NC Drone Protests Accelerate: Chapel Hill, Durham and Beyond: The week of the Democratic National Convention (DNC) in Charlotte was marked by protests against drones -- both in Charlotte itself, in Chicago (the site of Obama 2012 campaign headquarters), and in other locations. (Read more . . . . )

NORTHERN CALIFORNIA: Beale: Occupy Militarism, Ground the Drones, Shut the Base Down!: Protests and No Drones Encampments are held monthly at Beale Air Force Base, one hour north of Sacramento, near Marysville. Beale pilots control the Global Hawk, an important surveillance and reconnaissance drone that plays an important role in finding military drone targets and coordinating information before and during drone strikes. Pilots at Beale witness the carnage and devastation of drone strikes and are complicit in the assassination program. (Read more . . . . )

SOUTHERN CALIFORNIA: San Diego: Protests of Drone Maker General Atomics Go Global: Members of the San Diego chapter of Veterans for Peace (VFP) and a growing body of fellow protesters gather every week at the headquarters of the company that supplies the workhorse of the U.S. program of drone killing and drone surveillance -- the Predator and Reaper drones. Their goal in demonstrating outside the General Atomics facility is to heighten public awareness of the problems presented by drone technology, and to instigate oversight of drone use. (Read more . . . . )

FLORIDA: Why We Need to STOP the Raytheon Drones Killing Machine : A Raytheon spokesperson reportedly responded to the protest against his company's killer drone role by playing the employment card: "Here in Largo and St. Petersburg, Raytheon has more than 1,000 employees making communication products and systems that protect our national security and help keep America safe," said Peter Ramjug, according to the Tampa Bay Times. (See Drone maker Raytheon target of first RNC-related protest.) Apparently, the "communication products and systems" he refers to are the laser-guidance systems on the PAVE 500-lb bombs Raytheon supplies for drones. (Read more . . . . ) 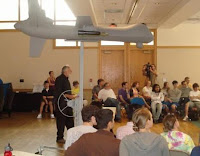 PENNSYLVANIA: September: Know Drones in Pennsylvania: Bethlehem and Bucks County: "Hino Haitham, a Lehigh University grad student born in Yemen, said the problem with the drones is not its planned use as law enforcement tools locally, but its current use as military weapons. Haitham's experience with drones came in 2009, when a drone strike in a village where she had family killed 40 civilians. 'They hadn't heard of Osama bin Laden or al-Qaida or anyone else like that,' she said. An international rights group has a lawsuit in the works regarding that strike, Haitham said." (Read more . . . . )

MARYLAND: Calling for End to Drone Research at Johns Hopkins University: On Tuesday May 8, nine activists, as part of an action organized by the National Campaign for Nonviolent Resistance (NCNR), occupied the office of the president of Johns Hopkins University (JHU) for eight hours, calling on the university to end the drone research that is being conducted at the Applied Physics Lab (APL). (Read more . . . . )

INDIANA: A Drone Tragedy Revealed in Indiana: Mr. Robert Rast's son, Navy corpsman Benjamin Rast, was killed accidentally in a Reaper drone strike in Afghanistan in April 2011; that strike also killed Marine Staff Sergeant Jeremy Smith. Robert Rast has set the replica up in his front yard and sits with it, telling those who stop what happened to his son. (Read more . . . . )

For more actions No Drones activity around the country, visit the sites listed on the right-hand side of this page! (What are you prepared to do?)
Posted by Joe Scarry at 8:09 AM