The April Days of Action Against Drones are coinciding with a groundswell in local efforts to control or ban drones. 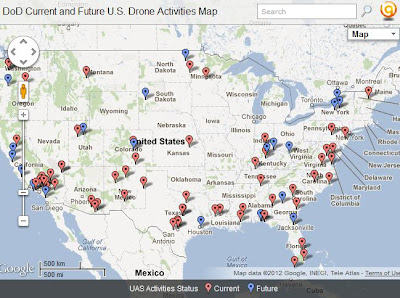 Major drivers in the move to ban drone use at the local level are (a) acquisition of drones by local sheriff and other law enforcement departments; and (b) the Department of Defense (DoD) plan to base drones in over 100 locations nationwide.

You can see state-by-state summaries of the DoD plans on selected state No Drones sites:

The Bill of Rights Defense Committee (BORDC) has released model drone legislation to assist local communities and states in the growing battle against domestic surveillance drones. BORDC worked with the organizers across the country who have been leading the opposition against rushed drone proliferation. The American Friends Service Committee, Alameda County Against Drones, the No Drones Network, and the Tenth Amendment Center all consulted on the language.

A growing number of localities are passing ordinances or laws on drones:

ILLINOIS - The Illinois Freedom from Drone Surveillance Act – Senate Bill 1587 – is designed to place modest guidelines on the use of this powerful technology. The bill, for example, would bar the arming of drones, except in certain emergencies. The bill also would curb how much information could be gathered by drones and require annual reporting to the public about the use of drones in Illinois. Act now: tell your state senators to regulate surveillance drones!

TENNESSEE - SB0796/HB0591, or the “Freedom from Unwanted Surveillance Act,” has passed both the Senate and the House, but continues to go through procedural modifications.

Read about ALL the ways YOU can be involved
in the April Days of Action Against Drones!