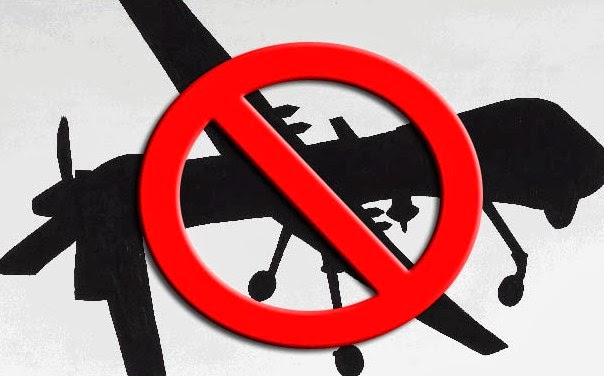 Today we issue an international call for Spring Days of Action – 2014, a coordinated campaign in April and May to:

The campaign will focus on drone bases, drone research facilities and test sites and drone manufacturers.

The campaign will provide information on:

1. The suffering of tens of thousands of people in Afghanistan, Pakistan, Yemen, Somalia and Gaza who are under drone attack, documenting the killing, the wounding and the devastating impact of constant drone surveillance on community life.

2. How attack and surveillance drones have become a key element in a massive wave of surveillance, clandestine military attacks and militarization generated by the United States to protect a global system of manufacture and oil and mineral exploitation that is creating unemployment and poverty, accelerating the waste of nonrenewable resources and contributing to environmental destruction and global warming.

In addition to cases in the Middle East, Africa and Central Asia, we will examine President Obama's "pivot" into the Asia-Pacific, where the United States has already sold and deployed drones in the vanguard of a shift of 60% of its military forces to try to control China and to enforce the planned Trans-Pacific Partnership.  We will show, among other things, how this surge of "pivot" forces, greatly enabled by drones, and supported by the US military-industrial complex, will hit every American community with even deeper cuts in the already fragile social programs on which people rely for survival.  In short, we will connect drones and militarization with "austerity" in America.

3. How drone attacks have effectively destroyed international and domestic legal protection of the rights to life, privacy, freedom of assembly and free speech and have opened the way for new levels of surveillance and repression around the world, and how, in the United States, increasing drone surveillance, added to surveillance by the National Security Agency and police, provides a new weapon to repress black, Hispanic, immigrant and low-income communities and to intimidate Americans who are increasingly unsettled by lack of jobs, economic inequality, corporate control of politics and the prospect of endless war.

We will discuss how the United States government and corporations conspire secretly to monitor US citizens and particularly how the Administration is accelerating drone surveillance operations and surveillance inside the United States with the same disregard for transparency and law that it applies to other countries, all with the cooperation of the Congress.

The campaign will draw attention to the call for a ban on weaponized drones by RootsAction.org that has generated a petition with over 80,000 signers and to efforts by the Granny Peace Brigade (New York City), KnowDrones.org and others to achieve an international ban on both weaponized drones and drone surveillance.

The campaign will also urge participation in the World Beyond War movement.

The following individuals and organizations endorse this Call:

April Days of Action Against Drones 2013 included a multi-day convergence in San Diego, the campaign against Boeing in Chicago, actions all up and down the East Coast, and much, much more!

RESOURCES: There are a large number of online tools, resources, and platforms for supporting the movement to stop drone warfare and surveillance.

(See Online Tools, Resources, and Platforms Supporting the Movement to Stop Drone Warfare and Surveillance)
Posted by Joe Scarry at 6:57 AM